Write the first paragraph of your page here.

Creation Science - the belief that the universe and living organisms originate from specific acts of divine creation, as in the biblical account, rather than by natural processes such as evolution (OED, 2013). 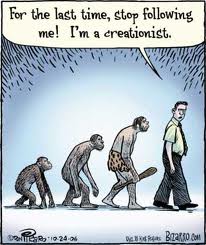 Darwinian evolution and Creationism are alike in one fundamental way: They both seek to explain the origin of life on earth as we know it today. The differences between the two however, are many fold. The theory of evolution is supported by evidence from several fields of scientific study; paleontology (fossil record), biogeography, comparative anatomy and molecular genetics. Creationism on the other hand relies on the Biblical account portrayed in the book of Genesis as evidence for the morphology of all living things including mankind. More recently however, creationism has sought to contrive evidence for their model by tearing down the evidence that supports evolution. They point to gaps in the fossil record, cite rapid catastrophic change-events in geology as the single causality of extinct species and discount mutations/natural selection as being insufficient to have generated the complexity of the earth’s biodiversity (Provine, 1988). Therefore, creationists deduce God recently (approximately 6,000 years ago) and suddenly created all forms of life, including humans, and that they have remained fixed in their morphology since creation. 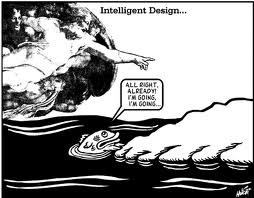 Intelligent Design - the theory that life, or the universe, cannot have arisen by chance and was designed and created by some intelligent entity: proponents of intelligent design say that theories other than evolution must be considered (OED, 2013.

Recently, the notion of Intelligent Design has found a stronghold in the beliefs systems of many Americans.  In 1996, the Center for Science and Culture was launched by the Seattle think-tank The Discovery Institute.  The goal of the center is to promote the concept of intelligent design.  Such organizations continue to lobby for “Equal Time” in science classrooms where evolution is taught (Baker, 2013).  According to a recent Pandas Word Count, the Theory of Intelligent Design is has replaced Creationism in the printed word.