Gene-culture co-evolution, also known as Dual Inheritance Theory (DIT) or bio-culture evolution is used to explain human behavioral evolution by means of intertwining the evolutionary processes of genetic evolution and cultural evolution.  A concept developed between the 1970s-1980s, gene-culture theory defines culture as information that is acquired through social learning in a particular population and states that it evolves through a selection process similar to that of the Darwinian natural selection.

According to the gene-culture co-evolution theory, genes impact cultural evolution by means of providing a psychological predisposition to social learning and work to network much of the information necessary for the function of the human brain. Similarly, culture influences genetic variance through cultural practices

DIT claims that both genetic and cultural evolution interacted with one another to aid in the evolution of the human race and maintains three claims regarding genes and culture evolution. Firstly, DIT states that the capacity for human populations to develop culture arose from psychological mechanisms that were genetically evolved, implying that at some point in the evolutionary history of human 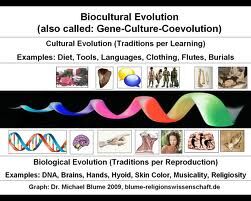 populations, the adaptation of social learning was deemed to be advantageous. Secondly, culture evolves by being transmitted, at a different rate than genetic evolution, by means of behavioral variation that has population level effects on human populations. Finally, DIT states that human genes and human culture coevolved

It is thought that there are five mechanisms by which the evolution of cultures takes place, according to the gene-culture co-evolution theory. These processes include random variation, guided variation, transmission bias, natural selection, and cultural drift.  The mechanisms of natural selection, cultural drift and random variation are similarly maintained in traits that are passed on by means of genetic evolution. Guided variation, however, is the process by which cultural traits are learned and maintained in a population through individual learning. Once a learned trait can be considered beneficial, it may be transferred to different individuals within the population by means of an adaptive standard. Biased transmission refers to a cultures tendency to develop certain traits over others based on the bias of that particular culture.  Certain bias may be results of taboos, genetic preferences, existing cultural traits, and the perceived frequency of variants in a population, which is often referred to as a “conformity bias”