In Darwin’s book, The Descent of Man (1871), he proposed the concept of sexual selection, which was the competition for the attention of females through the use of bright plumage. These features such as the peacock’s enormous tail feathers (Freeman & Herron, 2007) and the lion’s mane are examples of how these features help competition of mating success amongst males, demonstrating that the male is healthy and a high-quality sexual partner (Kutschera, 2004). Freeman and Herron (2007) define sexual selection as a differential reproductive success resulting from variation in mating success. When visiting the Sea of Cortez for my Baja trip, I saw a great example of sexual selection firsthand. The Great Frigatebirds (Fregata minor) inflate a bright red gular pouch, put up shimmering feathers around their necks, tilt and wag their heads, lengthen and shake their wings, and make loud vocal sounds to draw attention from females (Dearborn, Anders, & Williams, 2005). I remember seeing several male fragatebirds sitting on a large rock in the middle of the Sea of Cortez, all competing against each other to have the largest pouch, and to produce the most noise. This male completion did not lead to any physical aggression, however it was obviously a competition for territory and to access females. The bird with the largest pouch eventually made the two other birds that were inflating their pouches and squawking fly away, because he had obviously won this competition battle. This is also an example of sexual dimorphism due to the fact that the female frigatebirds do not have this bright red gular pouch to attract a mate; a common similarity to many male/female traits.

Sexual Selection - Can it be harmful?

An individual can produce features that can make it harmful to the individual's survial through sexual selection.  For example, the picture above shows a fabulous display of feathers to attact a mate.  Colorful tail feathers are an example how sexual selection can be harmful; this display can not only attract a mate, but also a predator. 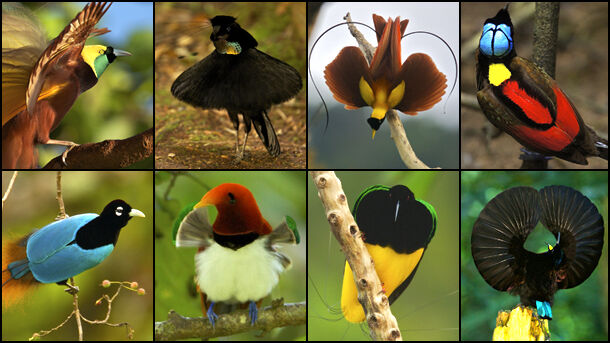 By visiting this website:  http://education.nationalgeographic.com/education/media/birds-paradise-project/?ar_a=1  you and your students can explore the wonders of sexual selection and evolution through an interactive experience with Cornell Lab of Ornithology and National Geographic.

Sexual Selection - Can it be Sneaky?

While sexually dimorphic traits (such as the flashy feathers pictured above) are what we often think of when we consider sexual selection, there are other traits that are virtually unseen. One way is through passive mate guarding and one specific example is through the use of copulatory plugs which prohibit other males from successfully inseminating the female after the first male has copulated with her. This strategy therefore depends less on a large body size to physically fight for or defend the female and allows for more equal size in the sexes. Males using this strategy might benefit more by being quick, stealthy and being able to find the females quickly. Dunham and Rudolf (2009) studied primates and found that species that use this strategy are often ones in which the females have a very short estrus which makes copulatory plugs (that can degrade over time) very effective. They also found that the two sexes in these species are often the same size.